‘Dance is just a reflection of life, and life is about everyone’ | Ballet Virginia combines classical ballet, diverse stories

The company is putting representation and diversity at the forefront. Their next production will be Sleeping Beauty in April.

Ballet Virginia gears up for emotional, grief-stricken tribute to the Central Park Five

Jalen Williams crouched on the studio floor, his head bowed to his hands in prayer.

The ballet dancer was portraying 14-year-old Kevin Richardson after Richardson had been falsely accused and arrested for the rape of a woman in a 1989 New York case. Four other dancers surround Williams, each portraying scared, confused teenagers who were also jailed. Read more

Ballet Virginia‘s new production, “Visions of Hope,” is centered on the journey of moving forward after hardship, featuring both classical and contemporary dance pieces. Rebecca Weinstein spoke with the choreographers behind the show, Lydia Roberts Coco, Suzanne Lownsbury, and Janina Michalski.

For their first public performances in more than a year, Ballet Virginia will return with a production that aims to capture the grief, strife, exasperation, and even gratitude, that reflect the world’s journey during the past 14 months.

Ballet Virginia Returns to the Stage 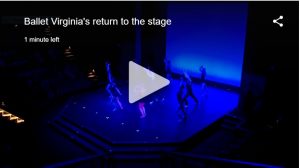 VIRGINIA BEACH, Va. (WAVY) — After more than a year, Ballet Virginia returned to the theater this weekend for their first live performances since the shutdowns began.

See Ballet Virginia dancers Hayley-Ann Vasco and Jackson Kettell. Their story starts at 6:43 in this episode of Curate.

The Art of Interacting Online

As coronavirus continues, instructors find a way to keep teaching the next generation of artists

“9 to 5 Company Dancers for Ballet Virginia”

Gus Perrotti, a Kings Grant resident, was about 7 years old when he first tried a class conducted by Ballet Virginia at the Great Neck Recreation Center.

“Dazzling Dancer Performs with Ballet Virginia for The Nutcracker”

-Coastal Virginia Magazine
By Ryan Miller, November/December 2019 issue
In a tutu and pointe shoes, balancing on the tip of her toes, arms raised, poised posture, this is Isabel Cary en pointe. Along with her sparkling crown and bodice, Cary will gracefully dance on stage as the Sugar Plum Fairy and Snow Queen in Ballet Virginia’s 12th annual Nutcracker at Sandler Center for the Performing Arts Dec. 20–22.

“Ballet Virginia debuts as a professional company Friday with a Halloween-inspired show, Masquerade.”

Last week, 10 adult dancers – the founding members of Ballet Virginia’s professional corps – spun and leaped the length of the rehearsal hall as they worked for their debut this weekend in “Masquerade.”

Talking with a lifelong dancer and professional choreographer on Coast Live

Lydia Roberts Coco found herself in New York City at Alvin Ailey American Dance Theater’s School on a full scholarship at the age of seventeen. Today she is the resident choreographer for Ballet Virginia’s professional company.

By Robyn Sidersky, October 17, 2019
A dog chasing its tail does not count as a pirouette. But that won’t stop local canines from being cast in Ballet Virginia’s production of “The Nutcracker” over the holidays. 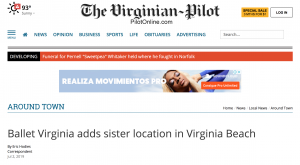 There’s activity at the building at 4314 Virginia Beach Blvd. near the entrance to Thalia. What’s going on? Virginia Beach residents aspiring to learn a few ballet moves can dance over to that building beginning Aug. 5. 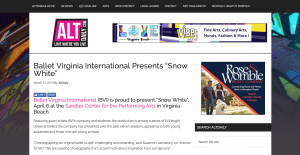 Ballet Virginia International (BVI) is proud to present “Snow White”, April 6 at the Sandler Center for the Performing Arts in Virginia Beach. Featuring guest artists, BVI’s company and students, the production is among a series of full-length classical ballets the company has presented over the past eleven seasons, appealing to both young audiences and those who are young at heart. 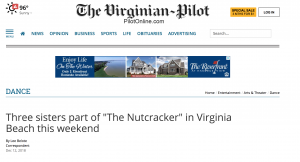 Three sisters part of “The Nutcracker” in Virginia Beach this weekend

Page and Jason Miyares have three good reasons to attend “The Nutcracker” performance at the Sandler Center. They are Gabriella, Elaina and Sophia.The Wimbledon on the Bay residents will be watching all three of their daughters perform in “The Nutcracker,” which is presented by Ballet Virginia International, a regional ballet company that’s located in Ghent.

Click here for an article on BVI dancer Caileigh Gold

Click here for Nutcracker 2014 rehearsal photos in the Virginian Pilot

Click here for Nutcracker 2013 rehearsal video by the Virginian Pilot

Press Release: Ballet Virginia Returns to the Stage for “Visions of Hope”